Kubernetes is a cloud-native enabler built around the principles for a resilient, manageable, observable, highly automated, loosely coupled system. We know that Kubernetes is infrastructure agnostic with the help of a provider specific Cloud Controller Manager. But Kubernetes has explicitly externalized the management of the nodes. Once they appear - correctly configured - in the cluster, Kubernetes can use them. If nodes fail, Kubernetes can’t do anything about it, external tooling is required. But every tool, every provider is different. So, why not elevate node management to a first class Kubernetes citizen? Why not create a Kubernetes native resource that manages machines just like pods? Such an approach is brought to you by the Machine Controller Manager (aka MCM), which, of course, is an open sourced project. MCM gives you the following benefits:

Understanding the sub-controllers and Custom Resources of MCM

The Custom Resources MachineDeployment, MachineSet and Machines are very much analogous to the native K8s resources of Deployment, ReplicaSet and Pods respectively. So, in the context of MCM: 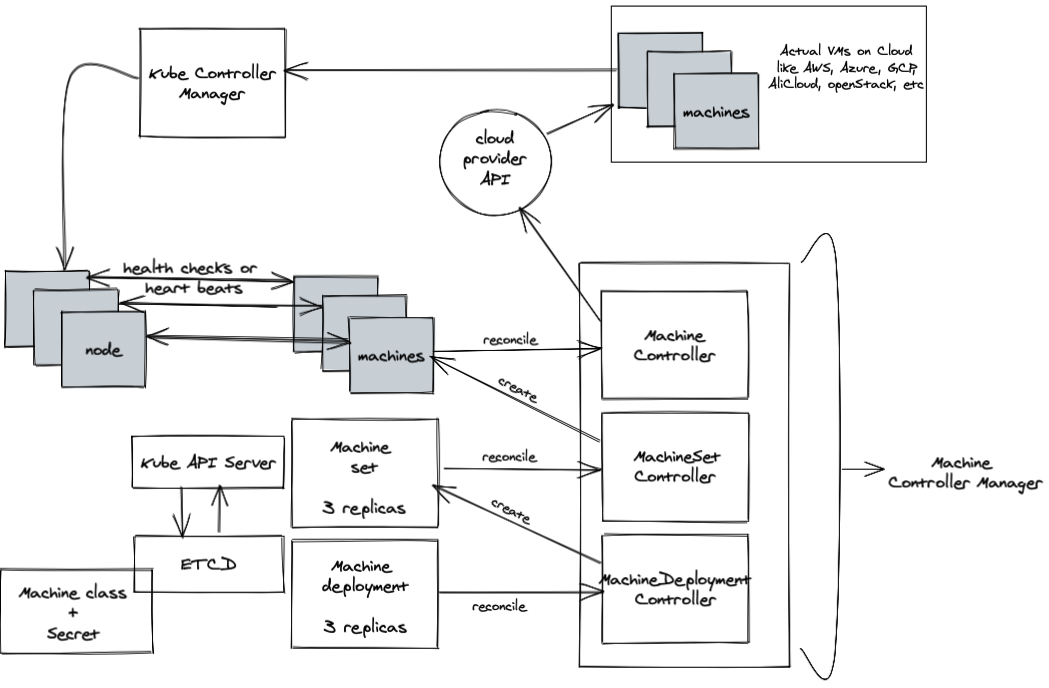 The cloud initialization script that is introduced into the VMs via the K8s Secret consumed by the MachineClasses talks to the KCM (K8s Controller Manager) and creates the node objects. After registering themselves to the Target Cluster, nodes start sending health signals to the machine objects. That is when MCM updates the status of the machine object from Pending to Running.

Evolution of MCM from In-Tree to Out-of-Tree (OOT) 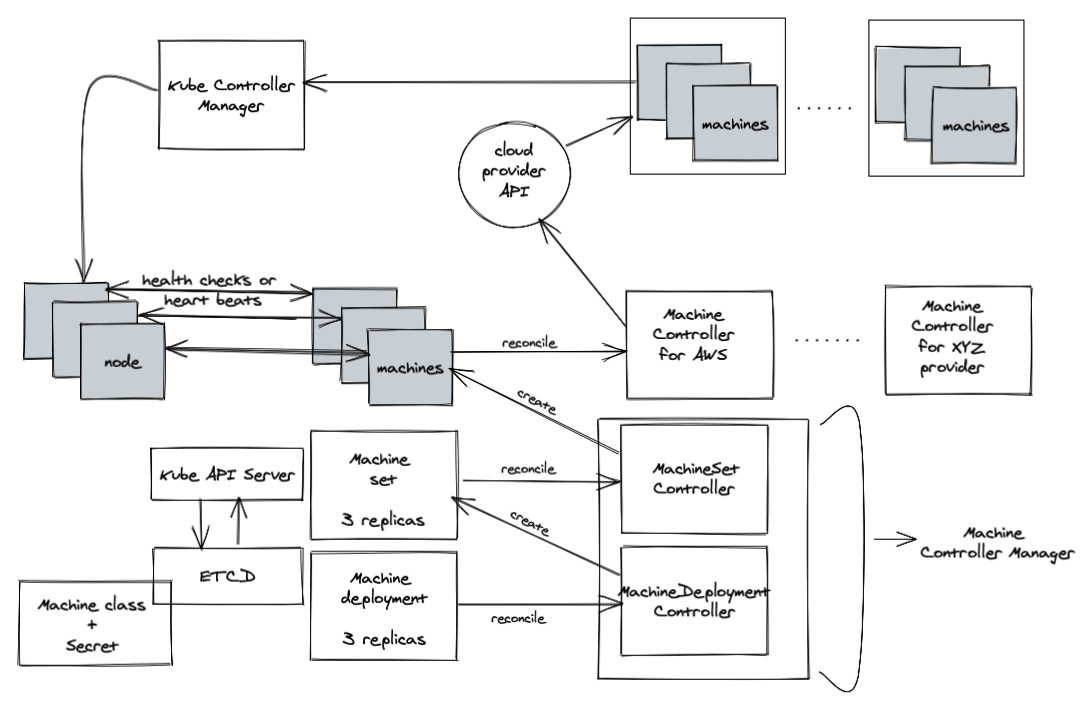 A lot of contributions are already being made towards an OOT Machine Controller Manager for various cloud providers. Below are the links to the repositories:

Watch the Out of Tree Machine Controller Manager video on our Gardener Project YouTube channel to understand more about OOT MCM.

MCM is originally developed and employed by a K8s Control Plane as a Service called Gardener. However, the MCM’s design is elegant enough to be employed when managing the machines of any independent K8s clusters, without having to necessarily associate it with Gardener.

Metal-stack is a set of microservices that implements Metal as a Service (MaaS). It enables you to turn your hardware into elastic cloud infrastructure. Metal-stack employs the adopted Machine Controller Manager to their Metal API. Check out an introduction to it in metal-stack - kubernetes on bare metal.

Also, other interesting use cases with MCM are implemented by Kubernetes enthusiasts, who for example adjusted the Machine Controller Manager to provision machines in the cloud to extend a local Raspberry-Pi K3s cluster. Read more about it in Scale out your Raspberry-Pi Kubernetes cluster to the cloud or check out this video on our Gardener Project YouTube channel.

Machine Controller Manager is the leading automation tool for machine management for, and in, Kubernetes. And the best part is that it is open sourced. It is freely (and easily) usable and extensible, and the community more than welcomes contributions.