Gardener uses the machine API and leverages the functionalities of the machine-controller-manager (MCM) in order to manage the worker nodes of a shoot cluster. The machine-controller-manager itself simply takes a reference to an OS-image and (optionally) some user-data (a script or configuration that is executed when a VM is bootstrapped), and forwards both to the provider’s API when creating VMs. MCM does not have any restrictions regarding supported operating systems as it does not modify or influence the machine’s configuration in any way - it just creates/deletes machines with the provided metadata.

Consequently, Gardener needs to provide this information when interacting with the machine-controller-manager. This means that basically every operating system is possible to be used, as long as there is some implementation that generates the OS-specific configuration in order to provision/bootstrap the machines.

⚠️ Currently, there are a few requirements:

The reasons for that will become evident later.

What does the user-data bootstrapping the machines contain?

Gardener installs a few components onto every worker machine in order to allow it to join the shoot cluster. There is the kubelet process, some scripts for continuously checking the health of kubelet and docker, but also configuration for log rotation, CA certificates, etc. The complete configuration you can find at the components folder. We are calling this the “original” user-data.

How does Gardener bootstrap the machines?

Usually, you would submit all the components you want to install onto the machine as part of the user-data during creation time. However, some providers do have a size limitation (around ~16KB) for that user-data. That’s why we do not send the “original” user-data to the machine-controller-manager (who then forwards it to the provider’s API). Instead, we only send a small script that downloads the “original” data and applies it on the machine directly. This way we can extend the “original” user-data without any size restrictions - plus we can modify it without the necessity of re-creating the machine (because we run a script that downloads and updates it continuously).

The high-level flow is as follows:

With gardener v1.23 a file with the content <<BOOTSTRAP_TOKEN>> is added to the cloud-config-<worker-group>-downloader OperatingSystemConfig (part of step 2 in the graphic below). Via the OS extension, the new file (with its content in clear-text) gets passed to the corresponding Worker resource.

The Worker controller has to guarantee that:

One implementation of that is depicted in the diagram below, where the machine-controller-manager creates a temporary token and replaces the placeholder.

As part of the user-data, the bootstrap-token is placed on the newly created VM under a defined path. The cloud-config-script will then refer to the file path of the added bootstrap token in the kubelet-bootstrap script. 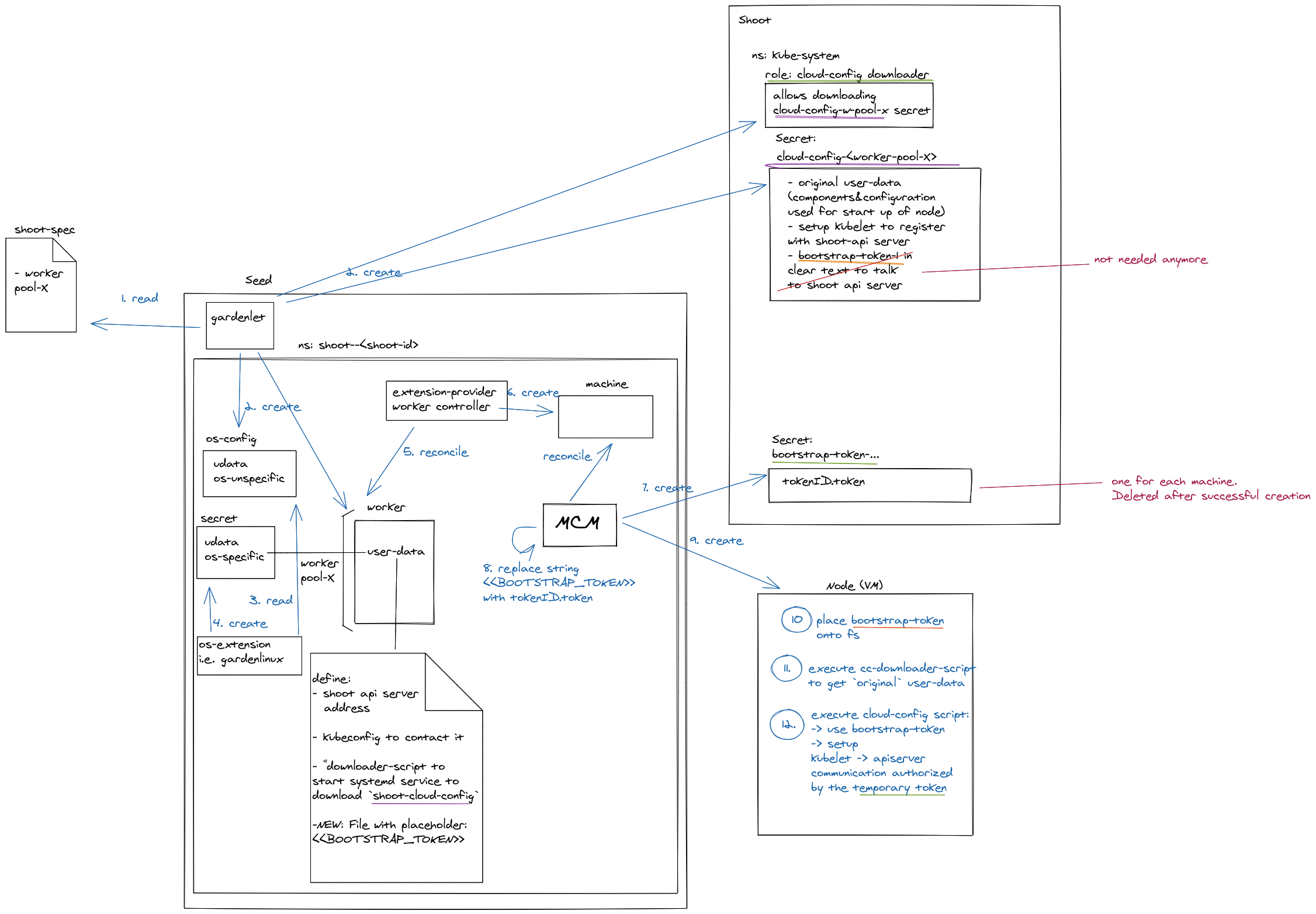 With Gardener v1.23, we replaced the long-valid bootstrap-token shared between nodes with a short-lived token unique for each node, ref: #3898.

❗ When updating to Gardener version >=1.35, the old bootstrap-token will be removed. You are required to update your extensions to the following versions when updating Gardener:

⚠️ If you run a provider extension that does not use Machine Controller Manager (MCM), you need to implement the functionality of creating a temporary bootstrap-token before updating your Gardener version to v1.35 or higher. All provider extensions maintained in the gardener GitHub repo use MCM.

How does Gardener update the user-data on already existing machines?

With ongoing development and new releases of Gardener, some new components could be required to get installed onto every shoot worker VM, or existing components might need to be changed. Gardener achieves that by simply updating the user-data inside the Secrets mentioned above (step 1). The downloader script is continuously (every 30s) reading the secret’s content (which might include an updated user-data) and storing it onto the disk. In order to re-apply the (new) downloaded data, the secrets do not only contain the “original” user-data but also another short script (called an “execution” script). This script checks whether the downloaded user-data differs from the one previously applied - and if required - re-applies it. After that it uses systemctl to restart the installed systemd units.

With the help of the execution script, Gardener can centrally control how machines are updated without the need of OS providers to (re-)implement that logic. However, as stated in the mentioned requirements above, the execution script assumes existence of Docker and systemd.

What needs to be implemented to support a new operating system?

As part of the shoot flow Gardener will create a special CRD in the seed cluster that needs to be reconciled by an extension controller, for example:

In order to support a new operating system, you need to write a controller that watches all OperatingSystemConfigs with .spec.type=<my-operating-system>. For those it shall generate a configuration blob that fits to your operating system. For example, a CoreOS controller might generate a CoreOS cloud-config or Ignition, SLES might generate cloud-init, and others might simply generate a bash script translating the .spec.units into systemd units, and .spec.files into real files on the disk.

OperatingSystemConfigs can have two purposes which can be used (or ignored) by the extension controllers: either provision or reconcile.

As described above, the “original” user-data must be re-applicable to allow in-place updates. The way how this is done is specific to the generated operating system config (e.g., for CoreOS cloud-init the command is /usr/bin/coreos-cloudinit --from-file=<path>, whereas SLES would run cloud-init --file <path> single -n write_files --frequency=once). Consequently, besides the generated OS config, the extension controller must also provide a command for re-application an updated version of the user-data. As visible in the mentioned examples, the command requires a path to the user-data file. Gardener will provide the path to the file in the OperatingSystemConfigs .spec.reloadConfigFilePath field (only if .spec.purpose=reconcile). As soon as Gardener detects that the user data has changed it will reload the systemd daemon and restart all the units provided in the .status.units[] list (see the below example). The same logic applies during the very first application of the whole configuration.

After generation, extension controllers are asked to store their OS config inside a Secret (as it might contain confidential data) in the same namespace. The secret’s .data could look like this:

Finally, the secret’s metadata, the OS-specific command to re-apply the configuration, and the list of systemd units that shall be considered to be restarted if an updated version of the user-data is re-applied must be provided in the OperatingSystemConfig’s .status field:

(The .status.command field is optional and must only be provided if .spec.reloadConfigFilePath exists).

Once the .status indicates that the extension controller finished reconciling Gardener will continue with the next step of the shoot reconciliation flow.

Gardener supports specifying a Container Runtime Interface (CRI) configuration in the OperatingSystemConfig resource. If the .spec.cri section exists, then the name property is mandatory. The only supported values for cri.name at the moment are: containerd and docker, which uses the in-tree dockershim. For example:

To support ContainerD, an OS extension must satisfy the following criteria:

If CRI configurations are not supported, it is recommended to create a validating webhook running in the garden cluster that prevents specifying the .spec.providers.workers[].cri section in the Shoot objects. 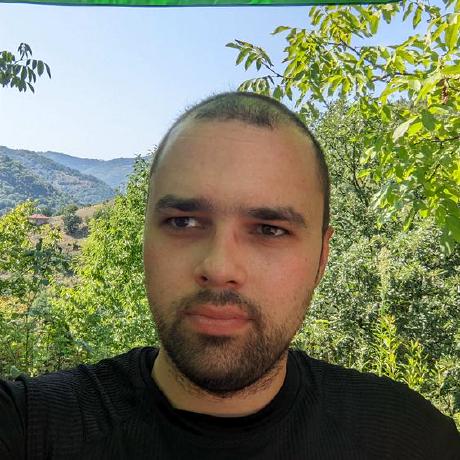 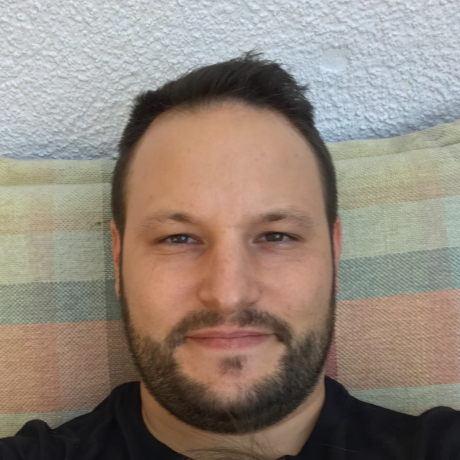