Increasing the Security of all Gardener Stakeholders

In summer 2018, the Gardener project team asked Kinvolk to execute several penetration tests in its role as third-party contractor. The goal of this ongoing work is to increase the security of all Gardener stakeholders in the open source community. Following the Gardener architecture, the control plane of a Gardener managed shoot cluster resides in the corresponding seed cluster. This is a Control-Plane-as-a-Service with a network air gap.

Along the way we found various kinds of security issues, for example, due to misconfiguration or missing isolation, as well as two special problems with upstream Kubernetes and its Control-Plane-as-a-Service architecture.

From this experience, we’d like to share a few examples of security issues that could happen on a Kubernetes installation and how to fix them.

Alban Crequy (Kinvolk) and Dirk Marwinski (SAP SE) gave a presentation entitled Hardening Multi-Cloud Kubernetes Clusters as a Service at KubeCon 2018 in Shanghai presenting some of the findings.

Here is a summary of the findings:

In most configurations, different components connect directly to the Kubernetes API server, often using a kubeconfig with a client certificate. The API server is started with the flag:

The API server will check whether the client certificate presented by kubectl, kubelet, scheduler or another component is really signed by the configured certificate authority for clients. 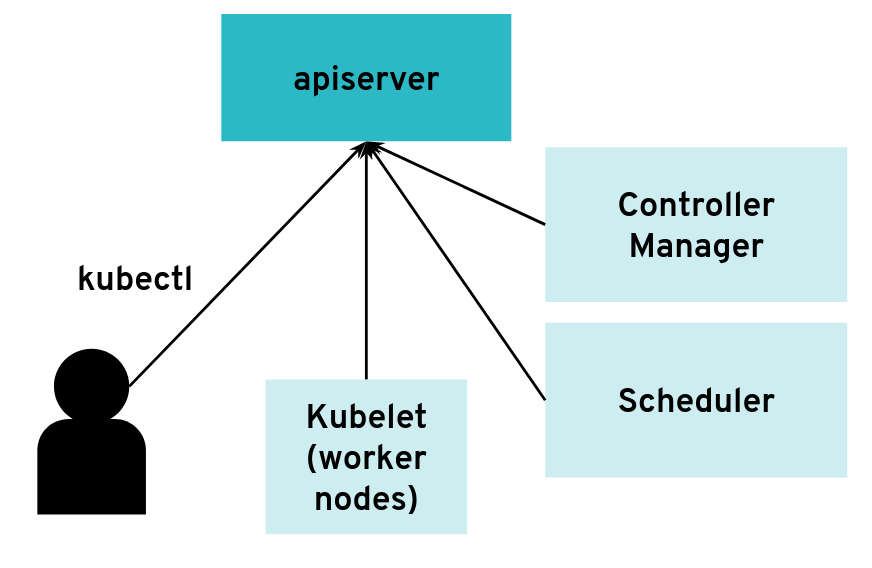 The API server can have many clients of various kinds

However, it is possible to configure the API server differently for use with an intermediate authenticating proxy. The proxy will authenticate the client with its own custom method and then issue HTTP requests to the API server with additional HTTP headers specifying the user name and group name. The API server should only accept HTTP requests with HTTP headers from a legitimate proxy. To allow the API server to check incoming requests, you need pass on a list of certificate authorities (CAs) to it. Requests coming from a proxy are only accepted if they use a client certificate that is signed by one of the CAs of that list. 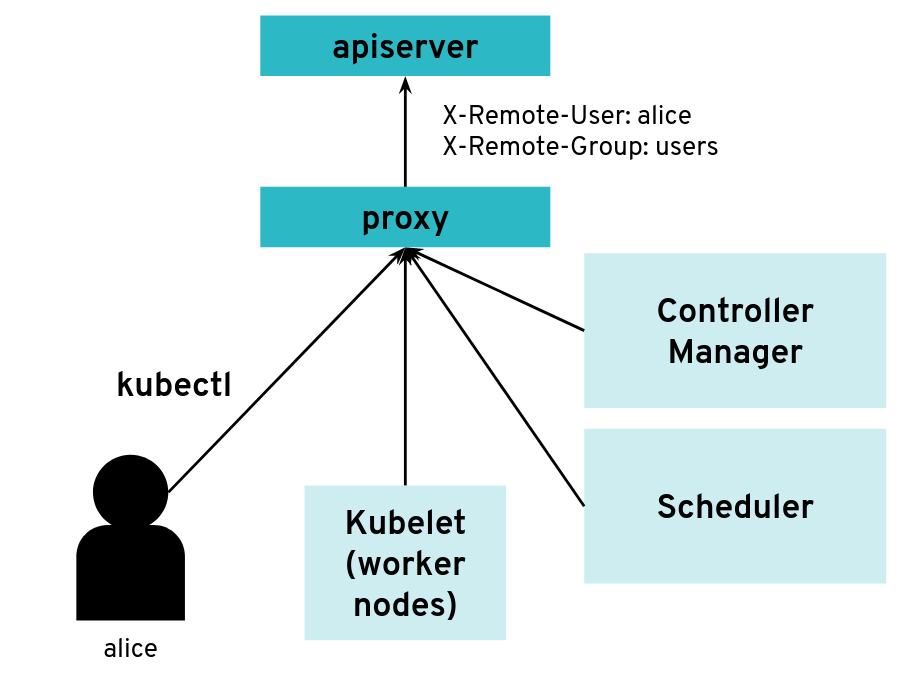 So far, so good. But what happens if malicious user “Mallory” tries to connect directly to the API server and reuses the HTTP headers to pretend to be someone else? 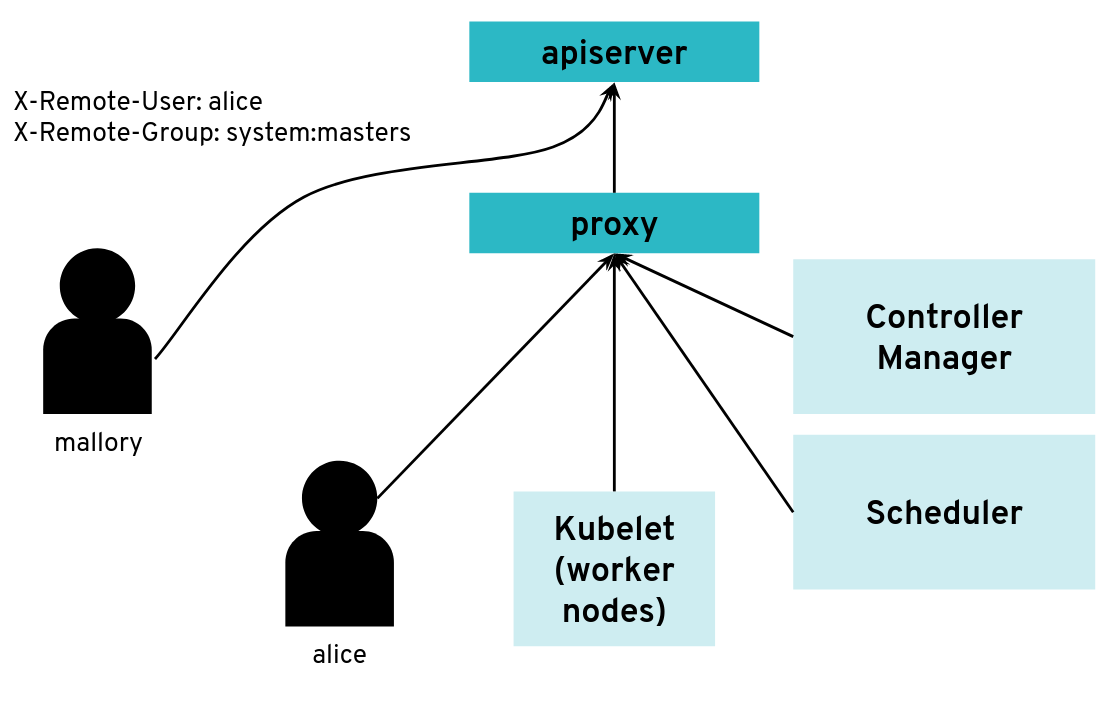 What happens when a client bypasses the proxy, connecting directly to the API server?

You only run into an issue when the same certificate authority is used for both the API server and the proxy. Then, any Kubernetes client certificate can be used to take the role of different user or group as the API server will accept the user header and group header.

The kubectl tool does not normally add those HTTP headers but it’s pretty easy to generate the corresponding HTTP requests manually.

We worked on improving the Kubernetes documentation to make clearer that this configuration should be avoided.

Scenario 2: Exploration of the Control Plane Network with Malicious HTTP-Redirects

The API server is a central component of Kubernetes and many components initiate connections to it, including the Kubelet running on worker nodes. Most of the requests from those clients will end up updating Kubernetes objects (pods, services, deployments, and so on) in the etcd database but the API server usually does not need to initiate TCP connections itself. 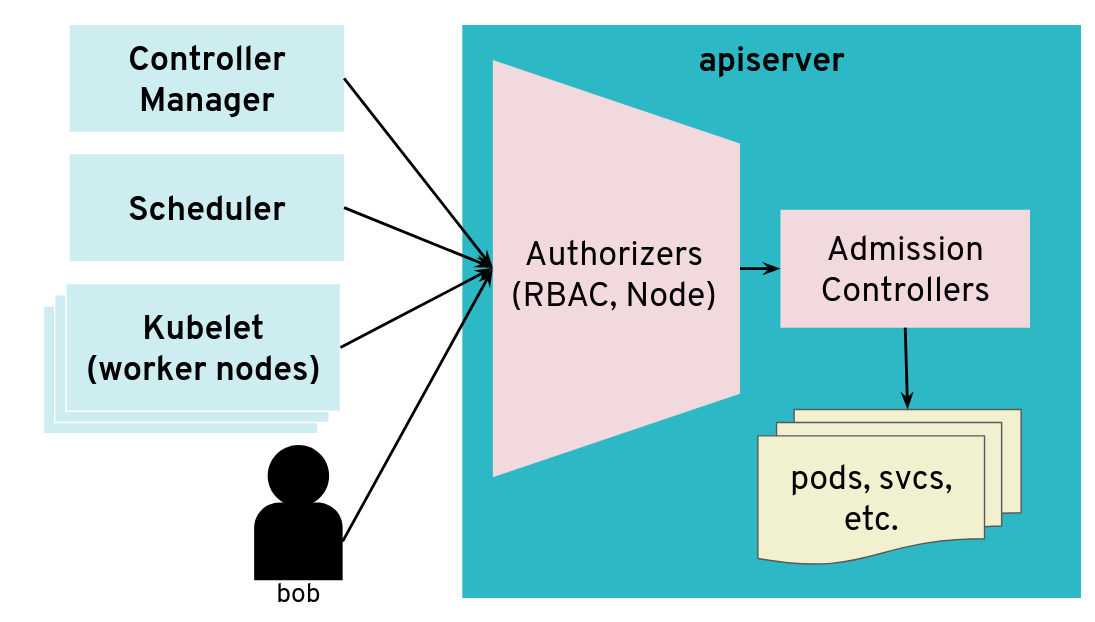 The API server is mostly a component that receives requests 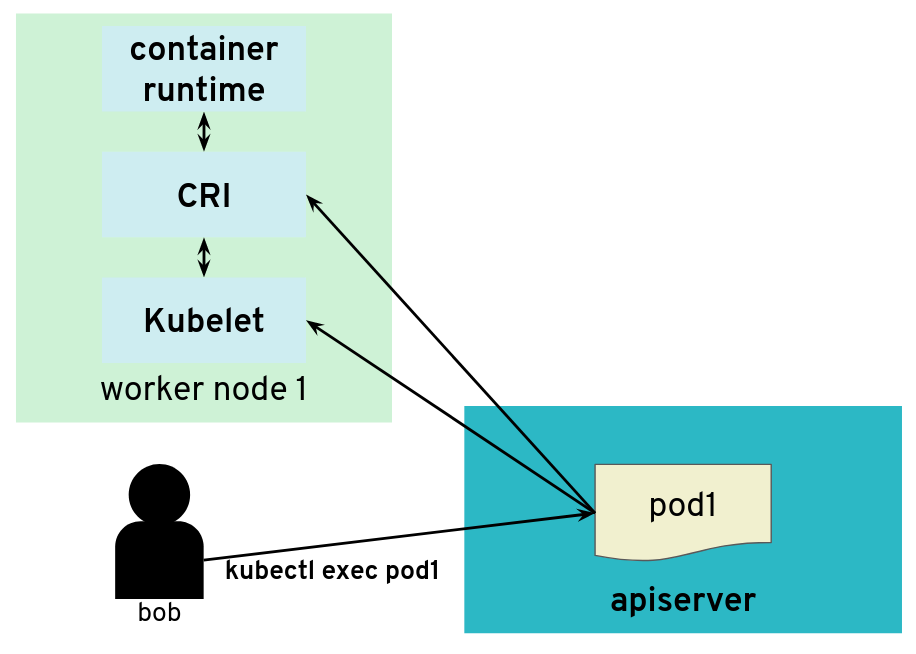 But the API server also initiates some connections, for example, to worker nodes

It’s often quite easy for users of a Kubernetes cluster to get access to worker nodes and tamper with the Kubelet. They could be given explicit SSH access or they could be given a kubeconfig with enough privileges to create privileged pods or even just pods with “host” volumes.

In contrast, users — even those with “system:masters” permissions or “root” rights — are often not given access to the control plane. On setups like for example GKE or Gardener, the control plane is running on separate nodes, with a different administrative access. It could be hosted on a different cloud provider account. So users are not free to explore the internal network in the control plane.

What would happen if a user was tampering with the Kubelet to make it maliciously redirect kubectl exec requests to a different random endpoint? Most likely the given endpoint would not speak the streaming server protocol, so there would be an error. However, the full HTTP payload from the endpoint is included in the error message printed by kubectl exec. 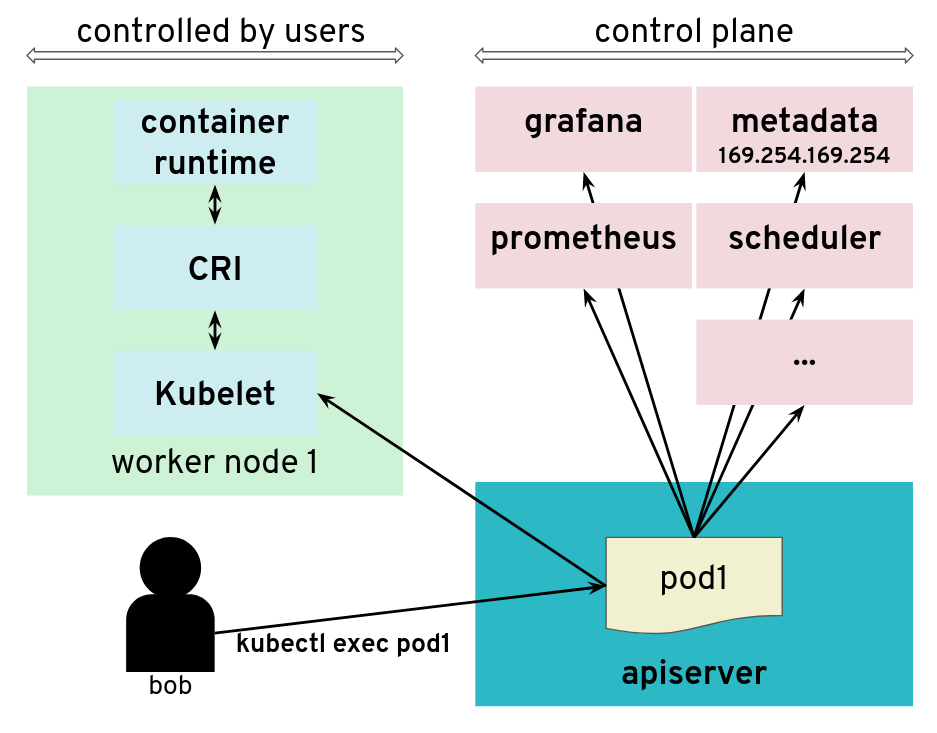 The API server is tricked to connect to other components

We have reported this issue to the Kubernetes Security mailing list and the public pull request that addresses the issue has been merged PR#66516. It provides a way to enforce HTTP redirect validation (disabled by default).

But there are several other ways that users could trigger the API server to generate HTTP requests and get the reply payload back, so it is advised to isolate the API server and other components from the network as additional precautious measures. Depending on where the API server runs, it could be with Kubernetes Network Policies, EC2 Security Groups or just iptables directly. Following the defense in depth principle, it is a good idea to apply the API server HTTP redirect validation when it is available as well as firewall rules.

In Gardener, this has been fixed with Kubernetes network policies along with changes to ensure the API server does not need to contact the metadata service. You can see more details in the announcements on the Gardener mailing list. This is tracked in CVE-2018-2475.

To be protected from this issue, stakeholders should: 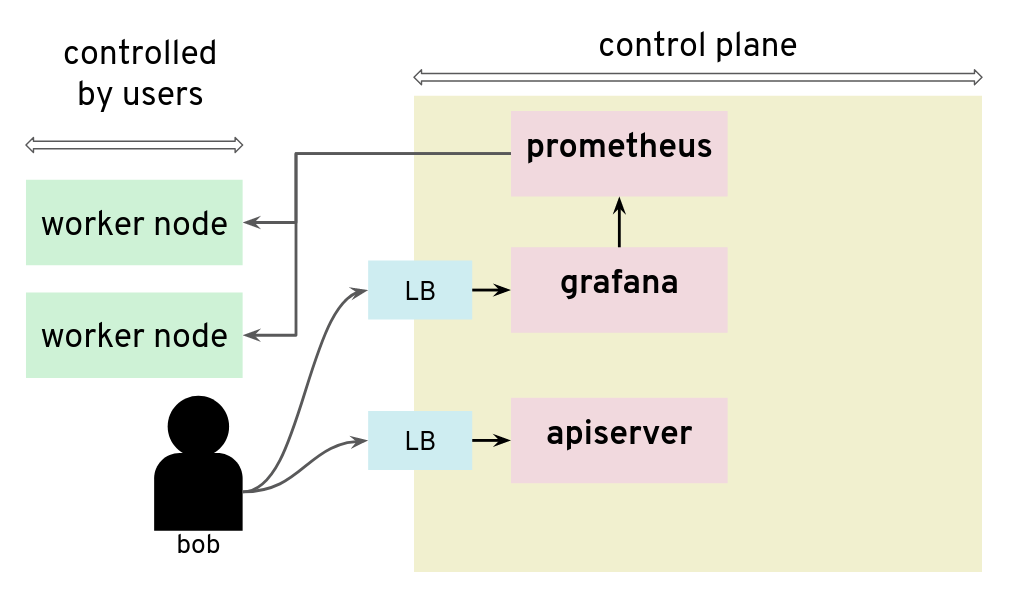 Prometheus and Grafana can be used to monitor worker nodes

Unfortunately, that setup was not protecting the control plane network from nosy users. By configuring a new custom data source in Grafana, we could send HTTP requests to target the control plane network, for example the AWS metadata service. The reply payload is not displayed on the Grafana Web UI but it is possible to access it from the debugging console of the Chrome browser. 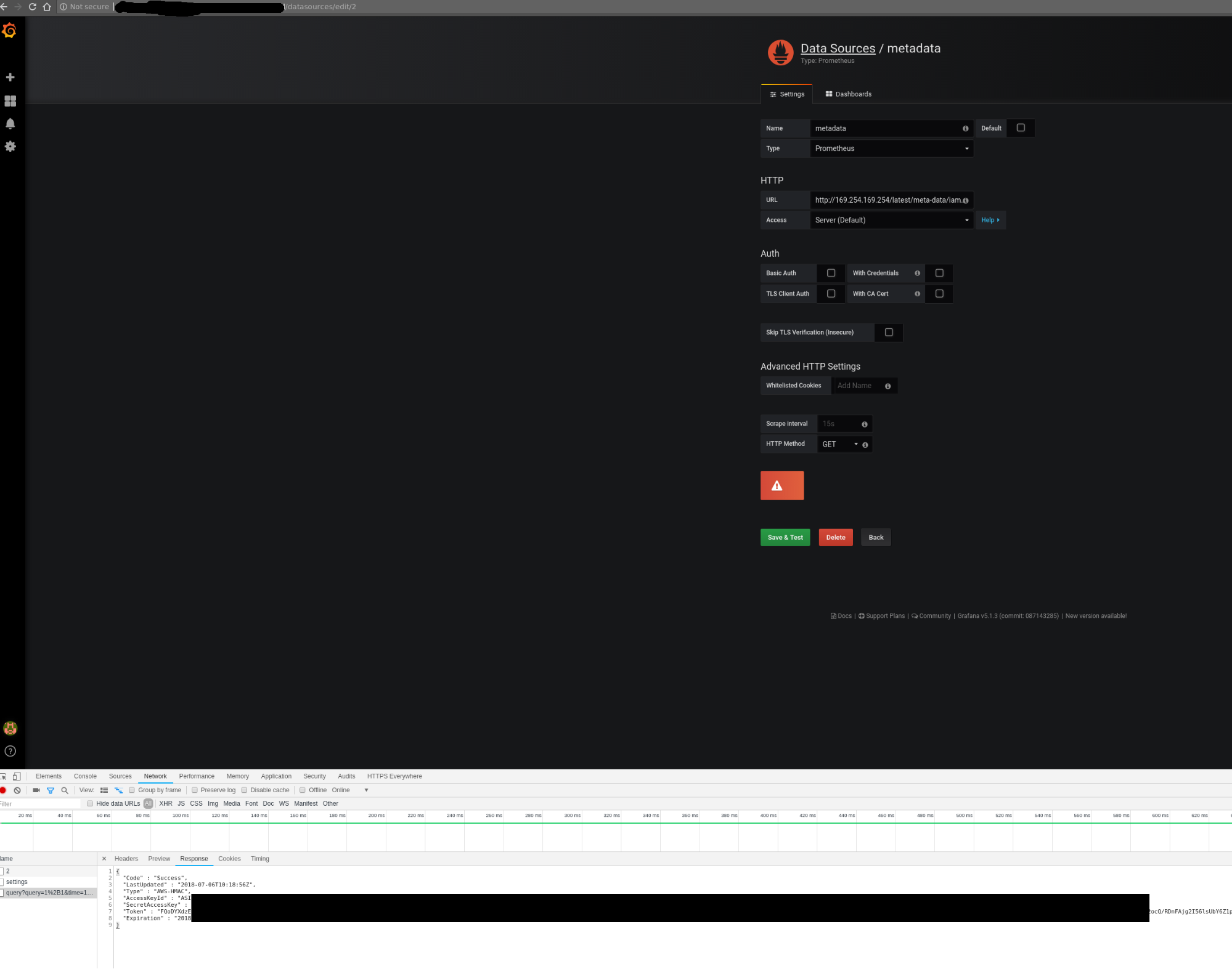 Credentials can be retrieved from the debugging console of Chrome 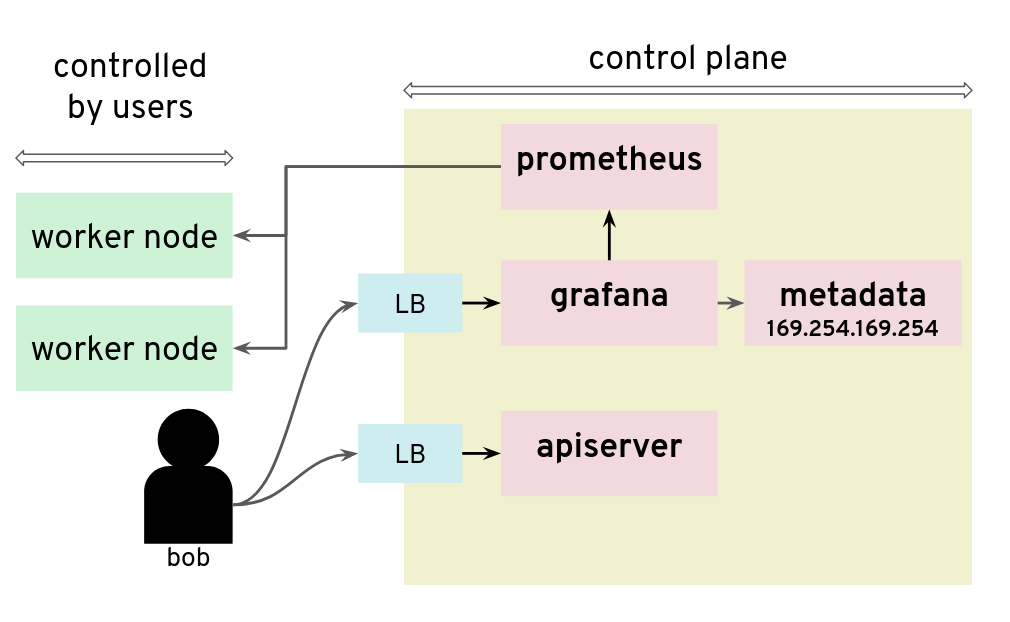 In that installation, users could get the “user-data” for the seed cluster from the metadata service and retrieve a kubeconfig for that Kubernetes cluster.

There are many possible measures to avoid this situation: lockdown Grafana features to only what’s necessary in this setup, block all unnecessary outgoing traffic, move Grafana to a different network, lockdown unauthenticated endpoints.

The three scenarios above show pitfalls with a Kubernetes setup. A lot of them were specific to the Kubernetes installation: different cloud providers or different configurations will show different weakness. Users should no longer be given access to Grafana. 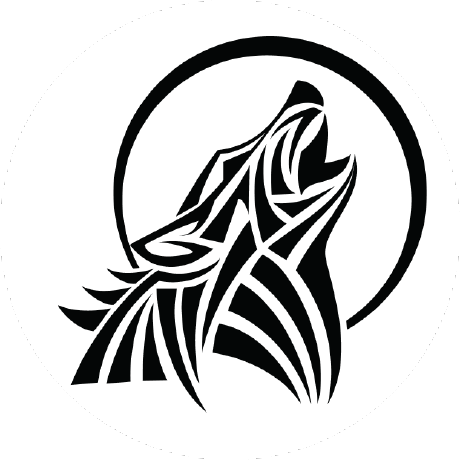 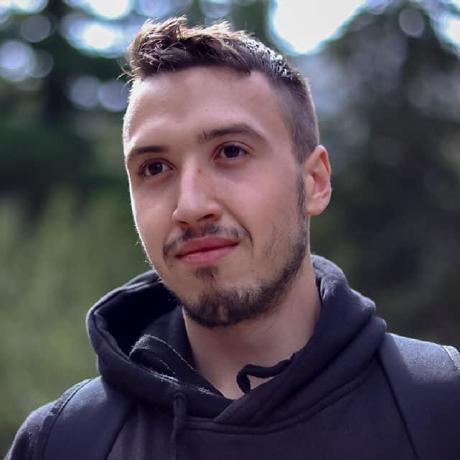